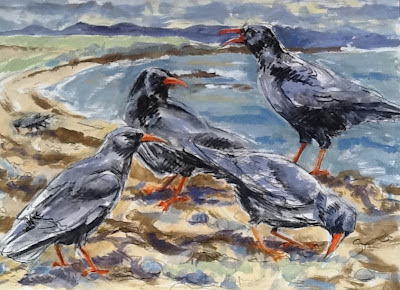 The crow family are renowned for their intelligence and adaptability, but are often a bit of a disappointment when it comes to outward appearances. Ravens and rooks are swathed in black, and the most jackdaws or hoodie crows can offer is a bit of grey to compliment their gothic look. But there is one bird who can salvage the sartorial reputation of the Corvids. Put your hands together ladies and gentlemen, for the chough. Like a showgirl with bright red lipstick and scarlet boots, the chough's appearance suggests a personality to outshine its drab cousins. 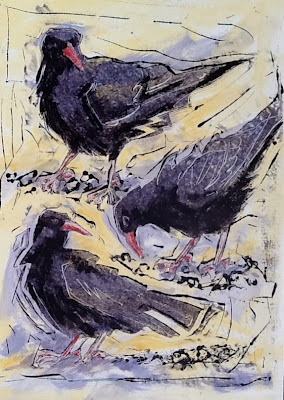 But as we all know, appearances can be deceptive. The chough has learned its lesson from Aesop, and doesn't let it's glamorous looks affect its behaviour. It knows the route to its success is hard work and diligence. Like commuters on the tube, the Oronsay choughs leave their winter roost each morning and follow the same flight path to the same patch of beach to dig for maggots in rotting seaweed. A flashy lifestyle it is not.
Despite enjoying a view from here as far as the Outer Isles, these Choughs are birds of narrow horizons. They teach their chicks where the best kelp washes up for kelp fly maggots and where the best cow pats fall for beetle larvae. They mate for life, and use the same nest site each year. I live only 20 miles due west of Oronsay, and never hear of choughs being seen on the mainland. In the last 200 years, with the decline of mixed farming, choughs have retreated to the islands. But thanks to the RSPB's agricultural work on Colonsay and Oronsay, they are slowing clawing their way back, and now have 13 breeding pairs here.
I imagine one day looking out of my window and seeing that graceful, lilting flight and hearing the elegant call of a pair of choughs - a reward for the perseverance of both birds and conservationists. And those red legs would give the local hoodies something to think about. 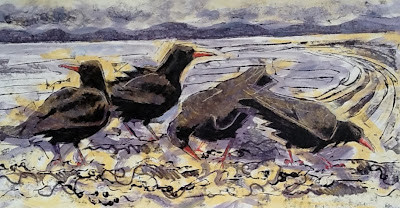