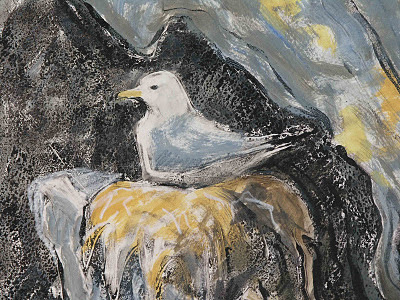 In the summer I spent two days at the seabird cliffs of Colonsay. I met Ellie Owen and Tessa Cole, who were doing amazing research for the RSPB "FAME" project (Future of the Atlantic Marine Environment). I hope to return to this inspiring place next year to do some work for them, and also to do a residency for the Colonsay Spring Festival. I'll be running a couple of workshops for field drawing and print-making in May, based around the seabirds. 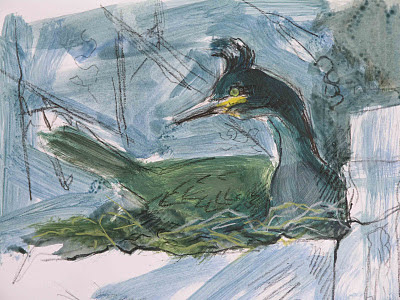 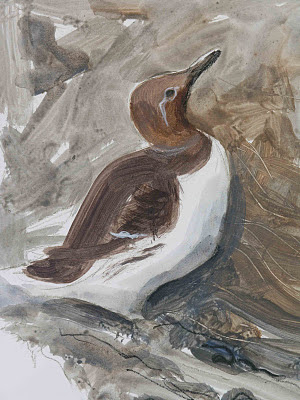 
This is an modified excerpt and some pictures from an article I had published in Birdwatch Magazine in October this year.

"I live in a west-coast Scottish village, surrounded by ancient hill-top forts. When the Vikings harried these shores, locals must have lived in fear of raiders from the North. Last autumn we were visited again, and word spread quickly from house to house. My neighbour rang at first light and insisted that I come to her house. In the upstairs bedroom her guests, bleary-eyed, had been evicted from their beds. The room was lit by an orange glow as the flame-coloured autumnal leaves of the rowan tree outside almost touched the window. And in the tree, a flock of Waxwings - masked raiders, alert and wary, ready to pillage and plunder. The local Blackbird had realised too late the severity of the situation. In vain he tried to keep the intruders from his winter food-supply, but he was outnumbered. On the road below, mothers and children passed by on their way to school, unaware of the drama taking place above their heads. The Waxwings flew up, but returned again, fluttering, stretching, plucking, grabbing - tossing berries into the air before gulping them down. Soon, not a single berry remained. With a whirr of wings the flock was gone, leaving us all happy at the interruption of our domestic routines. All of us except, maybe, the Blackbird." 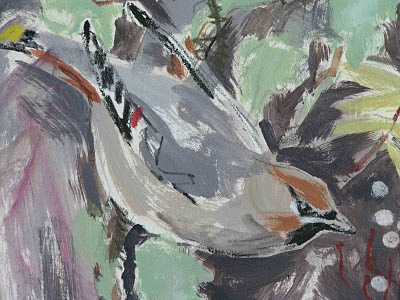 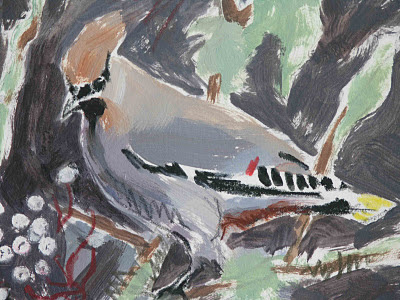 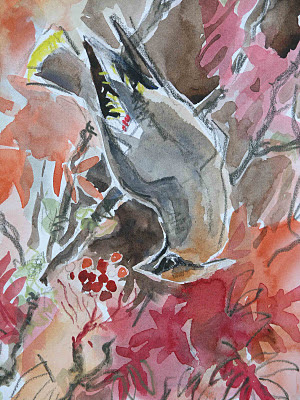 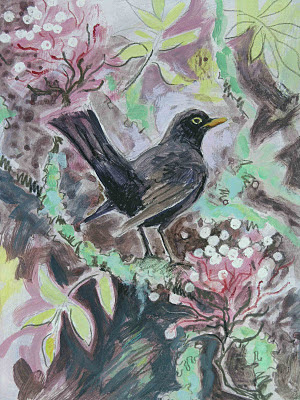 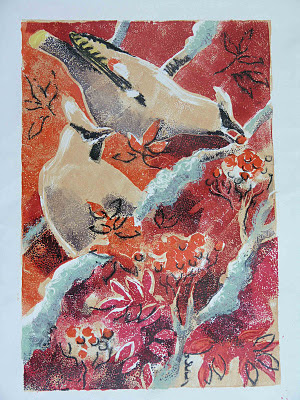 I made a second visit to Oronsay in June. The RSPB have the agricutural tenancy of the island, and farm in such a way as to allow the native wildlife to thrive alongside the farmed animals. The natural grassland that is found around the outside of the island is Machair, made up of shell-sand thrown up from the shore. The cattle graze here in winter, but are shut out in spring to allow a rich variety of wildflowers to grow. The plants are as beautiful as their names - Ragged Robin, Lesser Butterfly Orchid, Yellow Rattle and Adder's Tongue Fern. The fields are mown every September to provide winter bedding for the cattle, and by removing the nutrients in this way, the land is kept from becoming too lush and overgrown.
It was lovely to lie on the dry ground and listen to the Bumble Bees humming between the Red Clover flowers. Because the meadow was so open I could get a great view of a male Skylark (below) which was displaying to a female on the ground. Normally derided as LBJ's, or Little Brown Jobs, I was close enough to see the bold patterning of his plumage. 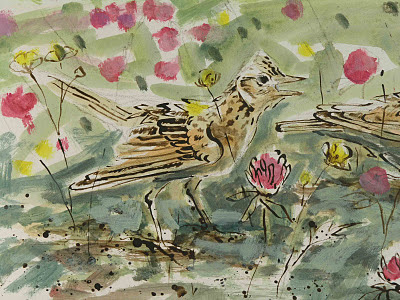 In complete contrast to the Machair, the "in by" land around the farmhouse is allowed to grow up into an annual multistory grassland jungle. Plants layer one above another as they reach for the sky, fueled by a rich soil. Nettles, cow-parsley and hogweed jostle for space, and provide perfect cover for the shy Corncrake (below). These rare birds arrive from Africa in the Spring, and dive straight into the safety of the thick vegetation that has been grown for them. I sat for ages at the corner of the field, listening to a cacophony of rasping calls, as 7 male corncrakes each staked their claim to a patch of meadow. I often find that when I'm sitting still and drawing, wildlife eventually forgets I'm there. Eventually I was rewarded with a brief, tantalizing glimpse of this noisy bird. 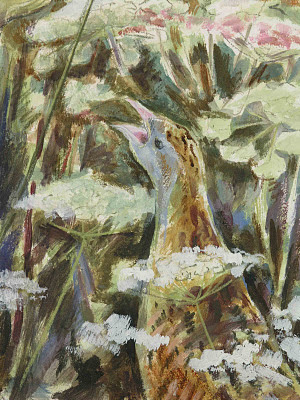