I have tried quite a few versions of the Gentoo Penguins porpoising, as I find it such a compelling image. Unless you're a Sealion, you only see tantalizing, brief flashes of colour as the birds "fly" out of the water and disappear in a neat splash. I'm doing some monoprints of this too, and will post them later on.

I'm putting up my last few pictures from the Falkland Islands, so I can then move on to Scottish subject-matter.

FUR SEALS
On New Island, Southern Fur Seals haul out at the bottom of steep cliffs. The females appear out of the sea-swirled kelp, and harumph over the rocks to find the crevice where they've left their pup. The small black babies are hiding under the boulders, out of the way of the territorial males. When there's a testosterone face-off, the thick-set males dash across the rocks with little regard for anything in their way. Mostly though, they seem content to lounge in the sun, opening one lazy eye to glare, if an insubordinate adolescent gets too close. 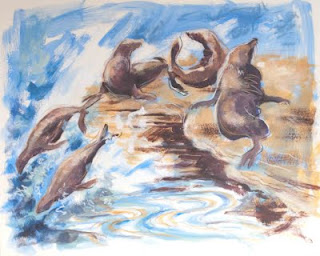 BLACK-BROWED ALBATROSS
The courtship display of the Black-browed Albatross is such a romantic affair. The birds croon to each other as they delicately preen those hard-to-reach feathers around their mate's eyes. I've been nipped by those hooked beaks, and can tell you what fearsome weapons they are. This mutual grooming must reinforce their trust for each other. 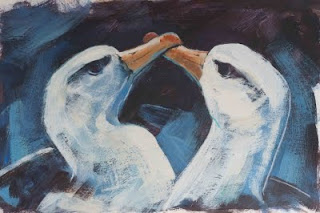