Field sketches from the Falklands

In January we returned to New Island in the Falkland Islands. Mark and I worked there 11 years ago, making a film for National Geographic. I'd made a few sketches then, in between filming, but this time it was wonderful to see the place afresh through a painter's eyes. It was also great to catch up with old friends who live and work there.

I'll put up some of my fieldwork here. Soon I'll follow it up with studio work, made back in Scotland. 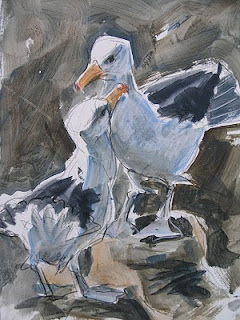 In January, adult Black-browed albatrosses already have chicks, but immature birds also hang around the colony. If they find an empty nest they'll practice being grown-up and try out some courtship moves. 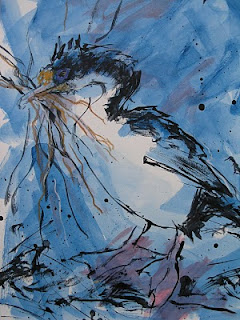 King cormorants collect nesting material throughout the breeding season. They come crash-landing into the colony with a whirring of wings, and a beak so full of tussock grass that they can hardly see where they are going. 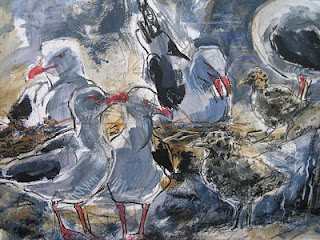 Across the bay from our hut was a colony of Dolphin Gulls, and we could hear the cacophony by day and night. 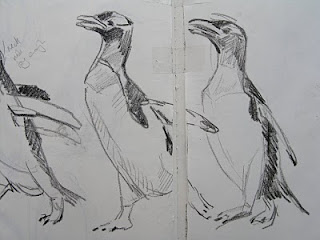 Gentoo penguins look great both in and out of the water. Their bodies are so expressive, stretching when on the move, but tubby when at rest. 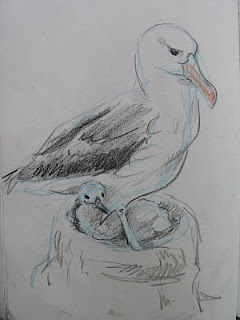 When the Black-browed Albatross chicks are small, one parent stays to protect it while the other goes fishing.

I seem to have run out of space for pictures. I'll do another post tomorrow.
Posted by jane at 20:41 No comments: